The built environment is evolving faster than ever. Everything from the humblest home to the tallest skyscraper is being shaped anew by computer technology.

More and more, our buildings themselves are becoming enmeshed with networks of “smart” systems and devices that can talk with one another and respond to the needs of occupants in real-time. Not unlike how ONE‑KEY™ delivers smart digital solutions that connect construction professionals and the work they do in the field with key stakeholders in back office and tool crib.

We’ve already talked at length about smart cities. Now it’s time to take a look at how digital technology is being used to make smarter buildings.

What Is “Smart” Technology?

To understand what a smart building is, we first have to paddle upstream and learn a bit more about what we mean when we characterize a thing as “smart.”

Though it typically applies to our fellow human beings, the word “smart” has increasingly been deployed to describe the rudimentary “intelligence” displayed by certain forms of modern technology.

Where did this usage come from? In a technological context, the term “smart”  goes at least as far back as an acronym coined by IBM in the 1990s: Self-Monitoring, Analysis, and Reporting Technology, or S.M.A.R.T refers to a failure detection system used in computer hard disks.

Indeed, the development of “smart” tech has followed the meteoric rise of computers along their seemingly inescapable track from the early days of ENIAC and the ARPANET to our dizzyingly futuristic era of the Internet, machine learning, and artificial intelligence.

As our computers have shrunk in size and grown in power, it has become easier than ever to seamlessly weave them into “smart” consumer products, imbuing otherwise inanimate objects with active digital presences that users can access and control online.

From here, we arrive at the Internet of Things, or IoT: Networks of “smart” objects (everything from light bulbs to refrigerators) that are connected to the internet via onboard sensors and computer chips.

One-Key is a prime example of how a collection of smart objects can be formed into a miniature IoT network: With built-in Bluetooth and tracker tags that can be affixed to nearly any surface, users of the free One-Key app are empowered to track the physical locations of their tools and organize them into digital inventories from the convenience of a mobile device or desktop computer. But on top of that, users of smart tools can take dial in precision settings for repeatability in application-specific tasks, these tools can locked out remotely in theft situations, and data can be pulled (such as on our hydraulic tools) to generate customizable reporting for key stakeholders.

What Is a Smart Building?

Now that we have a clearer idea about what smart technology is, let’s talk about what makes a building smart.

So, what is a smart building? A smart building is a structure enmeshed with a fully-integrated IoT style network of advanced and often automated technological systems aimed at enhancing the efficiency, operability, safety, and comfort of the building. 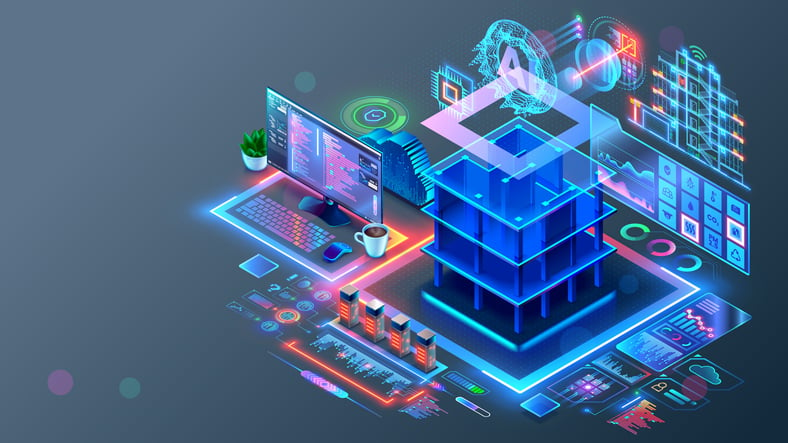 A smart building is what you get when you combine futuristic computer tech with four walls and a ceiling. They are characterized above all else by how their disparate systems are digitally interlinked, bound together under a single system of management. Traditional buildings, by comparison, have systems that remain siloed off from one another.

Yet many buildings nowadays have some level of “smartness” — that is, even older homes can now be retrofitted with IoT appliances like robotic vacuum cleaners and automated building-wide systems like smart thermostats.

Which is to say that a building’s degree of “smartness” falls on a spectrum, with individual smart features on the low end and a panoply of fully-integrated and centrally managed IoT elements on the high end.

A Brief History of Smart Buildings

A 1984 New York Times article, for example, conjures “a new generation of buildings” born from the union of traditional construction and telecommunications technology “that seem almost to think for themselves . . . called intelligent buildings.”

While there is no strict criteria or established checklist for what makes a building smart, there are nevertheless a few key characteristics that many modern smart buildings share: 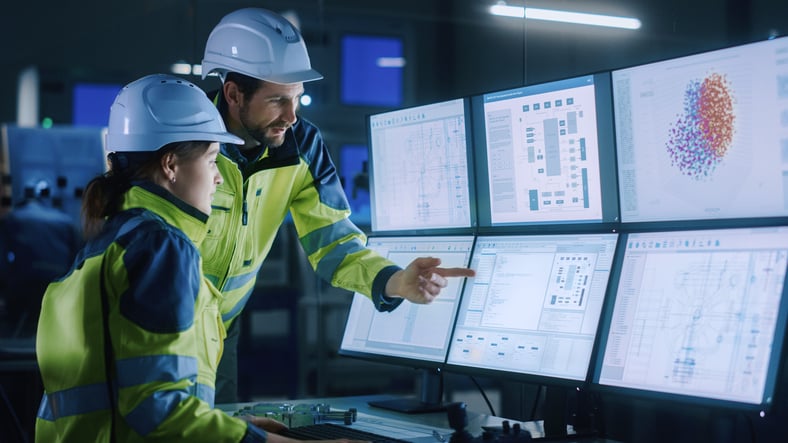 Much like the glittering megastructures depicted in science fiction cinema and television, smart buildings are defined almost entirely by the advanced state of their technology. Smart buildings are therefore aspirational in a sense, gesturing toward an idealized future of frictionless indoor splendor, our every need catered to by computer-driven helpers.

While we’re not quite there yet, here are a few of the definitive futuristic systems that can be found within modern smart buildings:

What Are the Benefits of Smart Buildings?

Humans love gizmos and gadgetry, but there are a lot of sensible reasons to be attracted to smart buildings beyond the allure of their technological wizardry.

The most daunting yet simultaneously most exciting challenge that confronts the construction industry in the 21st Century is how to build for a future on a warming planet. While they don’t represent a be-all-end-all solution to the problem, smart buildings are an important part of how we can do just that.

The latest United Nations assessment of the climate crisis is as grim as ever, reporting that there is now “no credible pathway” to keeping global warming from outstripping the 1.5 degrees Celsius threshold laid out by the Paris Agreement. The UN report shows that unless “an urgent system-wide transformation” is embraced by the international community, we are headed to a nearly 3 degree increase in temperature by the end of this century.

There’s a host of bold actions that the construction industry can take to become more sustainable and reduce its sizable impact on global climate (roughly 39% of all greenhouse gas emissions come from buildings). One such action is to make greener and–you guessed it– smarter buildings.

Just as green roofs and sustainable construction materials can go a long way toward decarbonizing our buildings, so too can thoughtful use of digital technologies that intelligently regulate how energy is (and isn’t) used within them. For instance, a recent study (1) found that buildings with green HVAC systems managed by a smart BEMS saw an average 7.7% reduction in power consumption. Now imagine the energy efficiency potential of a smart building hooked into a renewable grid outfitted with automatic shutters for optimizing passive solar heat.

Data captured by the building’s IoT sensor arrays can be transformed into actionable information about the performance of a structure’s various systems and when they require maintenance. The bulk of a building’s most vital functions are invisible to the occupant, be it the HVAC ducts, plumbing, or electrical lines. In a smart building, every component within these systems can be monitored remotely and flagged the moment there’s a problem.

The main reason for developing any form of technology in the first place is to reduce the amount of labor it takes to get through a day-in-the-life. Integrated with a structure-wide IoT, a smart building has the ability to automate all sorts of functions, from climate and light control to security and maintenance, freeing up occupants to focus their energies on other matters.

Smart buildings are reservoirs of valuable data that can be mined and leveraged for a variety of purposes. One of those purposes is the reduction of operational costs. The data collected in a smart building can shed light on how resources and materials are being used, identifying areas of slack and waste that might be trimmed or sculpted into a leaner form of building management.

Smart buildings may be all the rage, but they’re not without their pitfalls.  Here are a few of the challenges that smart buildings face:

Being entirely reliant on online digital infrastructure makes smart buildings uniquely vulnerable to cyber attacks. Every interconnected IoT device represents a potential attack surface that hackers can exploit to gain entry into an organization's innermost networks. Once inside, hackers can steal data, install ransomware, or seize control of a building’s basic functions. These types of attacks aren’t speculative; they’re happening right now, hence why construction cybersecurity is of utmost importance.

In May 2019, cybersecurity researchers revealed that hackers had begun actively targeting multiple vulnerabilities in door access control systems used in roughly 2,300 buildings. Concerns about the vulnerability of IoT hardware has even prompted action by the Biden administration, which recently announced plans to create a rating system for IoT devices based on their level of cybersecurity.

Technology is often inaccurately touted as a silver bullet for all our problems. Given the amount of investment in the tech sector, it can sometimes be difficult to separate the hype from reality. For instance, there are plenty of online publications that suggest smart buildings can save as much as 20% in energy costs, and yet none cite reputable sources or line up with actual research, which–as we stated earlier–estimates energy savings from smart buildings more in the range of 7-8%.

That’s why it’s important to approach the subject of smart buildings as you might any other: with a critical eye. Just as consumers of information ought to be wary of AI hype, greenwashing, and ransomware, readers are advised to be watchful for overblown claims about smart buildings that can’t be backed up with evidence.

Smart buildings bristle with sensors but not everyone is thrilled about the idea of IoT appliances and occupancy monitoring systems tracking their every movement. Smart buildings may be particularly inhospitable workplaces for this very reason. Companies like Walmart and Amazon already deploy technology to listen in on their employees in their fulfillment centers and store locations. Advocates of smart tech contend that these measures are useful for boosting revenue and instilling a culture of productivity in the workplace. Workers, on the other hand, argue that smart technology leads to overwork, excessive oversight, and invasions of privacy. And while it’s true that employers have a lot of legal leeway when it comes to monitoring their workers, it’s also possible to go too far, as exemplified by Barclays bank, which faces a $1.1 billion fine for using software to surveil its employees.

Smart buildings have the potential to improve the built environment. At the same time, it’s important to keep both feet on the ground and not allow our technology to blind us to the human element. Remember, buildings are for people. A smart building’s true intelligence lies not in the sophistication of its gadgetry but in its overall capacity to improve the lives of its occupants, reduce harmful effects on the natural world, and empower human beings to make informed decisions.