What Is Antikickback on a Drill or Saw? Explaining Power Tool Kickback

‹ Back To Blog Home › What Is Antikickback on a Drill or Saw? Explaining Power Tool Kickback
Thought Leadership
Lucas Marshall | Published: July 13, 2022 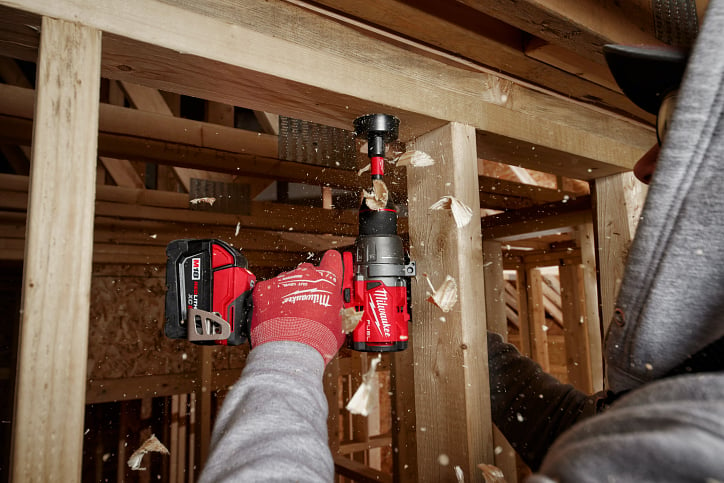 As we’ve previously written, construction continuously ranks as the #1 most dangerous occupation according to BLS data. Contributing to these factors is power tool usage, a common cause of accidental injury, which accounted for 4,057 cases from 2005-2015 as observed in two emergency departments in Queensland, Australia.

Chief among the causes of injury while using power tools is power tool kickback.

For example, an epidemiologic study of 594 participants ranked power tool kickback as the second most common cause of injury, accounting for 8.2% of injuries by end users of electric saws; injuries observed were caused by chain saws, electric saws, and hand grinders (ranging from simple lacerations to tendon injuries, fractures, and even amputations in extreme cases).

In this article, we’ll put power tool kickback into context—explaining what it is, what causes it, what precautionary safety steps you can take to prevent it from happening on the job, as well as share out on some cutting-edge power tool technologies that exit today and how they can help you perform installations safer.

What Is power tool kickback, anyway? The Power Tool Institute defines kickback as “sudden and interrupted movement of the tool or workpiece [… which is] typically caused by binding or pinching of the workpiece.”

What is drill kickback?

Power drill kickback can occur when you’re drilling in an application the tool’s motor doesn’t have sufficient power to deliver, or when you’re using an inferior bit; in these cases, drill bits get snagged in the material you’re drilling into, kicking back violently in protest rather than successfully drilling down and driving the screw in completely. The resulting bind up situations can lead to a possible drill kickback injury, which have been have been reported by the International Marine Contractors Association and widely discussed online in forums such as Fine Homebuilding.

Drill kickback can be particularly dangerous, even deadly. For example, Warshafsky Law notes an extreme case (reported by OSHA) where kickback caused a carpenter to lose balance, fall from a ladder, and die.

The same principle can be applied to sawing (which we’ll discuss next).

Kickback in relation to sawing occurs when wood is suddenly propelled backward toward the operator at a high rate of speed.

The Journal of Trauma (as reported in Popular Mechanics) estimates 31,400 people are treated in the ER each year from table saw injuries, the majority of which are due to kickback—both from trauma caused from wood striking the head, chest, or torso of the woodworker, or from the wood moving so quickly that the operator doesn’t have time to take their hand off of it and gets pulled across the saw blade.

Similarly, kickback can occur when using reciprocating saws, similar to drill kickback, when the blade binds up in wood, kicking the saw back at the operator.

How to Stop Drill Kickback and Prevent Other Power Kickback Scenarios

There are a number of ways to avoid kickback scenarios on drills and saws, as well as new-to-world technologies designed to prevent these types of situations and ensuing injuries from occurring.

What is antikickback on a drill?

The Power Tool Institute defines an anti-kickback device as “a device incorporated into some power tools intended to minimize the effects of kickback.”

Many of our drills and impacts at Milwaukee® Tool have incorporated antikickback.

Interstates-Craft notes that they’ve switched to Milwaukee® drills specifically for the antikickback feature, noting “on previous drills, we had wrist injuries caused when the drill would catch and kick.”

Still, antikickback control isn’t an excuse for using improper form. As Interstates-Craft’s operator notes, “you still gotta practice proper drilling techniques, gotta watch where your hands are, gotta watch where your body positioning is, gotta use your handle, keep two hands on the drill.” Similarly, BobVilla.com adds, “Always hold a drill perpendicular to the work surface to prevent the bit from catching the wood and twisting the drill violently.” In short: Don’t use improper technique that would make drill bits susceptible to catching.

Jonathan Abbott, Principal Engineer at Milwaukee® Tool notes that the newest generation M18 FUEL™ ½” Drill/Driver (discussed below) is “our first power tool made with machine learning! [...] our flagship drill with smart anti-kickback protection.” 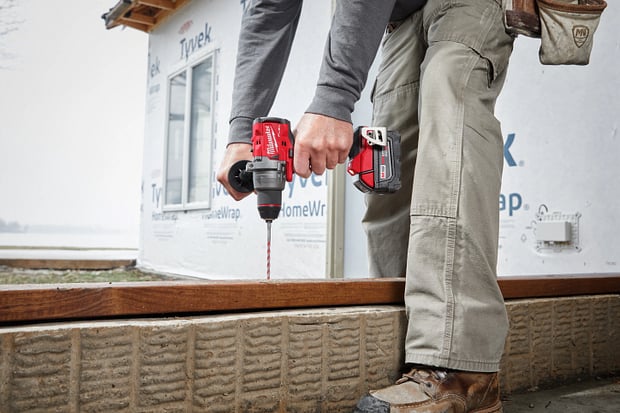 A 2003 study reported an estimated 93,880 saw-related injuries that were treated in U.S. hospital emergency rooms for the calendar year 2001. In 1,430 cases, the contributing factors cutting material kicked back causing the stock to hit the operator or the blade jammed in the stock/cutting material causing the stock to buck/bounce and hit the operator. In 3,360 of injuries, saw blades hit a knot in stock, kicked up wood, and kicked back.

Saw-related injuries, particularly those related to saw kickback, can thus be serious. There are, however, multiple ways to avoid saw kickback incidents as well as new-to-world technologies that help prevent them from occurring.

Stationary saws like M18 FUEL™ 8-1/4” Table Saw w/ ONE-KEY™ include anti-kickback pawls to help prevent saw kickback from occurring. However, proper form is just as important as with preventing drilling bind up situations.

As BobVilla.com notes with respect to table saw operation:

Avoid maiming fingers while using a table saw by ensuring the ‘fence,’ a guide for ripping wood, is parallel to the blade. This will keep the wood from pinching the blade and causing kickback, which can pull the wood—and your hands—into the moving saw. Do not, however, use a fence while simultaneously cross-cutting material with the miter gauge.

With regard to miter saws, they note, “Minimize the risk of kickback by starting the blade before it makes contact with the wood, and keeping the wood firmly pressed against the fence to minimize movement.”

A survey of injuries involving stationary saws conducted by the U.S. Consumer Product Safety Commission found that, in 93.7% of cases in which the stock kicked back or jumped, the operator thought that the blade contact was due to stock kickback.

As Maine Employers’ Mutual Insurance Company notes, injury to the triangular fibrocartilage complex (FTC) can be caused from something as mundane as repetitive motion injuries sustained from daily office keyboard typing, to something more severe like an injury sustained from power drill kickback; the best prevention method, they remark, is proper worker education. At Milwaukee® Tool, we’re committed to helping tradespeople achieve greater productivity through solutions that deliver increased performance, durability, and cutting-edge safety features to prevent injuries. And while we encourage you to consider our hardware and software solutions, we also encourage practicing construction safety at the org-level—hiring safety manager to provide worker safety training; attending safety summits; investing in proper PPE and industry-leading equipment; and maintaining a commitment to safety by determining your organization’s safety metrics and how to continuously improve.

An example of a safety-first culture might not only include investing in antikickback-embedded power tools, but also ensuring younger, less-experienced employees are practicing proper drilling and sawing techniques, as well as using construction drones to perform fly-by safety compliance checks. 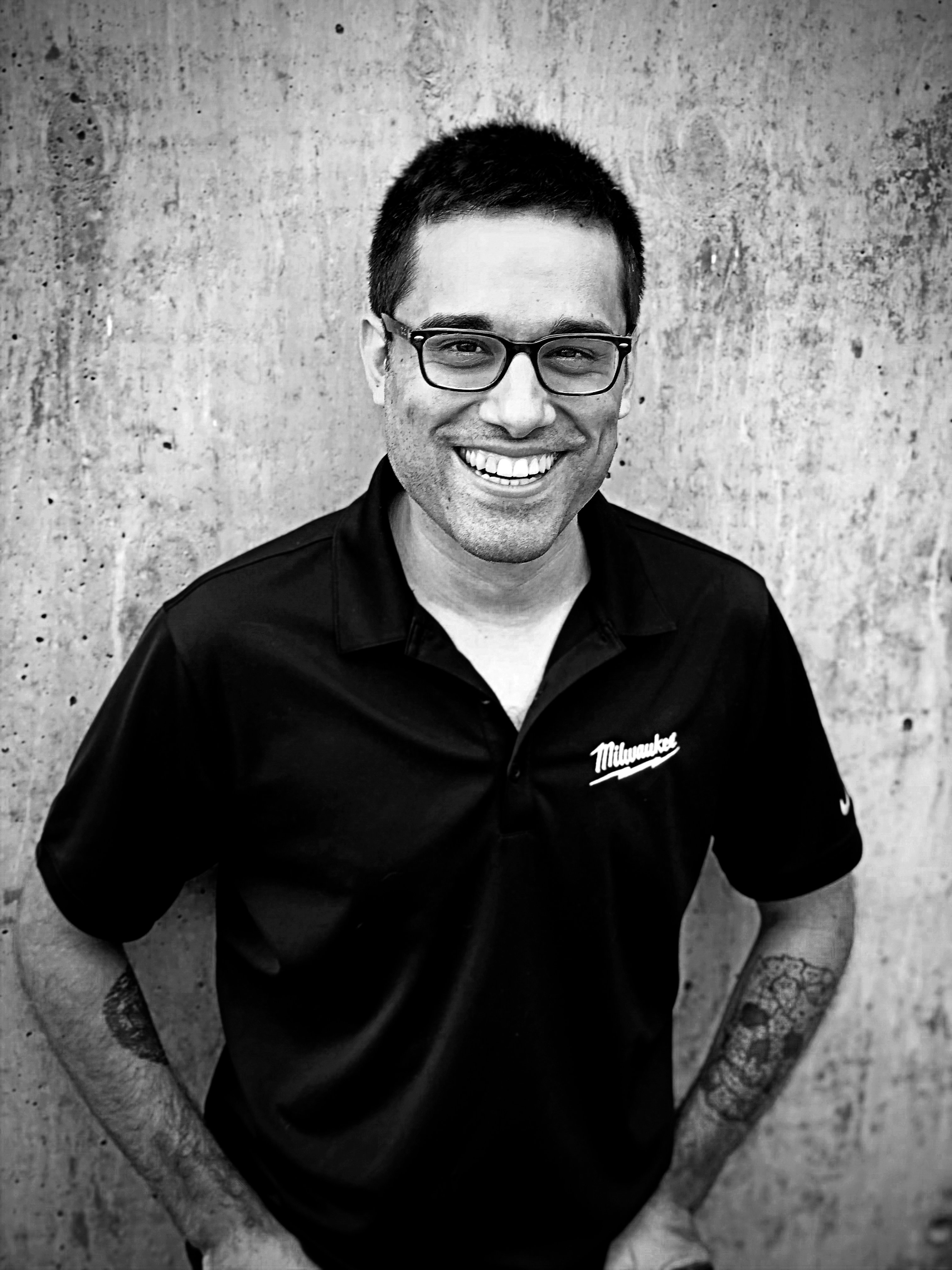 What would happen if we put architects in charge instead of politicians?

This is the question...

Why Is Ergonomics Important in Power Tool Design?

Power tools are bridges between the worker and the work, the points from which force is generated...

How Architects Can Better Advocate for Sustainable Building