What Is Generative Design in Construction?

Imagine being able to create thousands of viable design options for your dream home with a single click of a mouse.

Such a feat may someday be possible with generative design, an advanced computer technology that, while still in its infancy, is rapidly gaining momentum in the construction and manufacturing industries.

Generative design puts the computer in the co-pilot seat alongside human architects and product designers. Companies that have harnessed it are already realizing some major benefits, including part cost reductions of up to 20%, part weight reductions up to 15%, and cutting development time in half, according to McKinsey.

So what is generative design? How does it work? What benefits (and drawbacks) might it bring to the architecture, engineering, and construction industry?

What is generative design?

Generative design is a computer-assisted process that enables users to rapidly create and explore a variety of unique design options for a building or manufacturing project.

It accomplishes this with something called generative “artificial intelligence,” the same technology that’s behind headline-grabbing AI art generators like Lensa and DALL-E.

Here’s how Autodesk describes it:

At its core, generative design is a strategy that augments human capabilities by using algorithms to automate your design logic. You still define the design parameters, but instead of modeling one thing at a time, generative design software helps you—the designer—create many solutions simultaneously and sometimes even find “happy accidents” or unanticipated and unique solutions that would be difficult to discover with traditional methods.

Flowing lines, sweeping curves, and honeycombed “lightweighted” geometries are telltale signs that a structure has been created with generative design. These eye-catching biomimetic shapes are more than mere aesthetics, however. Generative design creates highly refined forms that have been precisely configured against dozens of alternatives for optimal strength, weight, flexibility, or any other number of handpicked design parameters.

What makes generative design such a powerful tool is that it arrives at these unique forms in bulk, using powerful algorithms to create hundreds if not thousands of design options for a project in a fraction of the time it would take to create a single concept using traditional methods. 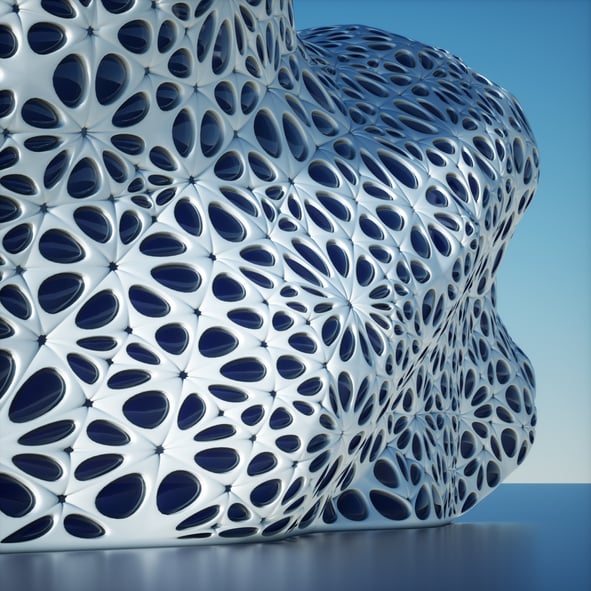 To understand how the generative design process works, it helps to see where it sits in relation to other design methods.

Let’s say you want to build a bridge.

In traditional design, an architect draws multiple sketches by hand, probably using a standard kit of drafting tools (compass, t-square, and so on) or maybe a digital sketchpad. Like the drawing itself, information about site surveys and structural engineering is factored in manually. This process is time and energy intensive, taking weeks or months to complete.

Then there’s computer aided design, or CAD. In this method, an architect uses digital tools in CAD software to create a comprehensive 3D model of the bridge, complete with site and structural data. Though significantly faster and more precise, CAD only allows you to work on one possible version of your bridge at a time.

Generative design represents a giant leap forward in terms of speed, efficiency, optimization, diversity, and complexity of design, allowing you to automatically generate and explore dozens of iterations until you zero-in on the perfect concept for your bridge.

In generative design, nothing is drawn manually. Instead, every design option is generated automatically by the computer.

It starts with a series of parameters: Do you want a steel suspension or concrete span bridge? Or maybe you want to utilize renewable materials instead? What do you want your bridge to look like? How strong do you want it to be? How flexible? How light? What’s your budget? What environmental stressors will be acting on your bridge?

These and many more constraints can be entered into generative design software like Autodesk’s Revit or Fusion 360 suites, acting as guide rails that help determine how the design process will unfold. Supplied with sets of big data about physics and structural engineering, a generative AI algorithm then creates a diverse array of possible design solutions for your bridge, analyzing and ranking which ones are worthy of further evolutions and exploration. 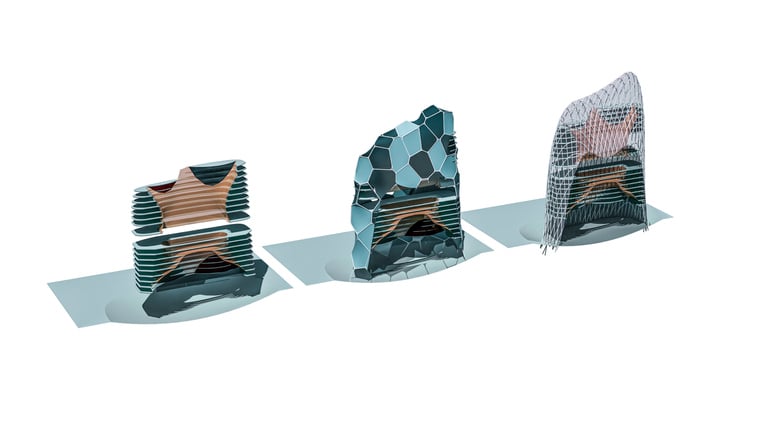 Generative design has been successfully deployed in many different industries, including consumer products, medical devices, aerospace, and auto-manufacturing.

In construction, generative design is primarily used during the structural design phase, though it can also be used to solve problems in other areas, such as the optimal positioning of a crane during the building process. For now, generative design is best used on a small scale as a tool for conceptualizing individual construction components as opposed to entire structures.

The final results of generative design are often startling, revealing optimized geometries that are almost alien in appearance. Your bridge project, for instance, might end up looking something like MX3D in Amsterdam, a sweeping 3D-printed steel pedestrian bridge that was conceptualized with generative design software.

Generative design is also capable of producing more conventional forms, such as the floor plans for Autodesk’s office in Toronto, or the optimized urban spaces generated by Sidewalk Labs’ Delve tool.

As unique as generative design is, it’s important to keep in mind that naturalistic geometry doesn't always signify that a building was created using generative design, or even computers for that matter. Designed in the 19th Century with models made of weighted strings, the Sagrada Familia Basilica in Barcelona, Spain, is an early example of the principles that generative design is based on.

Interior of the Sagrada Familia in Barcelona, Spain.

Speaking of foundational principles: some of the iconic buildings designed by architects Zaha Hadid and Frank Gehry often get highlighted as examples of generative design, when they were in fact created using an older but closely related process called parametric design.

Parametric design and topology optimization: How are they different from generative design?

It’s worth taking a moment to explain the distinctions between generative design and two other design concepts that it often gets mixed up with.

Those concepts are parametric design and topology optimization.

In use since the 1980s, parametric design is a computerized method that uses parameters and algorithms to automatically generate design concepts. 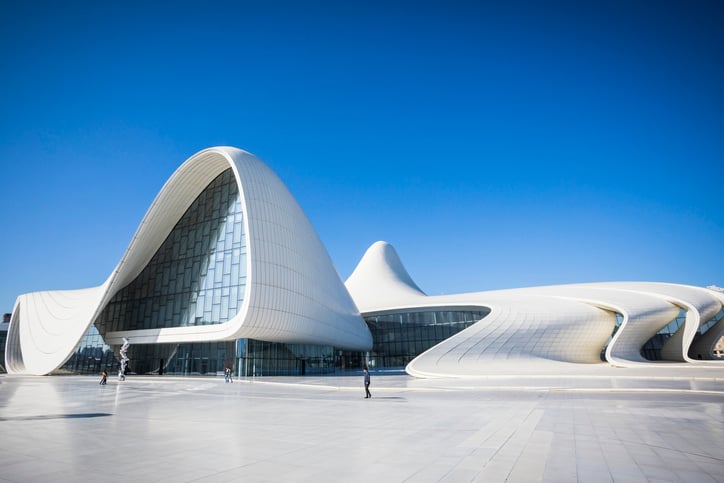 In parametric design, a designer has freedom to alter the parameters of an individual model in real-time. In generative design, the parameters are locked-in in advance and the algorithm is set loose to create multiple permutations of the model all at once.

Another concept that sometimes gets mixed up with generative design is topology optimization.

So to recap, parametric design and topology optimization are related but separate technologies that generative design deploys to pull off its greatest trick: generating many designs all at once.

The benefits of generative design

The drawbacks of generative design

For all its exciting potential, generative design is not without its drawbacks.

We’ve already written extensively about the host of ethical issues presented by artificial intelligence, one of the most concerning being the threat that automation poses to people’s jobs. Generative design may be a powerful tool, but just as some artists are decrying AI art generators as the death of artistry, not all architects and building designers should be expected to embrace this new technology with open arms.

Like AI, generative design is also the subject of a growing degree of hype. Despite claims to the contrary, generative design is still best used on a small scale as a tool for conceptualizing individual components as opposed to entire completed structures.  Pedestrian bridges are one thing, but when it comes to designing something on the scale of the Golden Gate bridge, generative design is–for now, at least–demonstrably not up to the task.

Generative design can also be a clunky and even inefficient process under the wrong circumstances. It takes expertise to create, train, and work with generative algorithms, and even if design teams have that expertise, they can end up spending more time struggling to get the algorithms to function correctly than on actual design work.

That’s because algorithms themselves aren’t always the most reliable. Even some of the most advanced AI art generators that respond to prompts with breathtaking accuracy on one day will generate confoundingly inaccurate responses on the next. Generative design is no different in practice. Once the parameters are entered into the design software, human designers are effectively flying blind, as they have zero real-time control of how the computer interprets their instructions. If the results don’t turn out as desired, the only way to correct the issue is to restart the process by going back and tweaking the parameters or reconfiguring the algorithm until the computer gets it right.

We are awash with exciting new technologies that promise to single-handedly revolutionize the construction industry . Generative design is one such technology, and while it is undeniably powerful, it alone is not the be-all-end-all future of construction.

To succeed in the design and construction of the “smart” and sustainable structures of tomorrow, we will need to leverage a multiplicity of cutting-edge tools and strategies, with human architects, engineers, and skilled workers always at the helm.

Design-Build vs Design-Bid-Build: 3 Reasons to Simplify Your Construction Process
Sustainable Construction: What Are Green Plumbing Systems All About?
Careers in Construction: How to Become a General Contractor
Green Cities: How to Make a Sustainable City