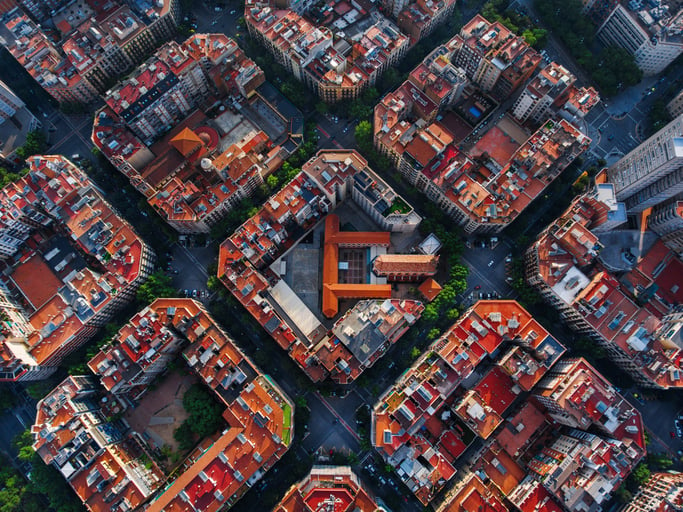 One of the most exciting and revolutionary ideas in the realm of sustainable city design is the superblock.

Superblocks promise to make cities greener, cleaner, and more livable. All they ask in return is to reclaim streets from cars and give them back to people.

Championed in Barcelona, Spain, superblocks have been identified by researchers as one of four urban designs that are most optimal for public health. To hammer that home: a recent study showed that if it succeeds in its plan to weave superblocks across the entire city, Barcelona could extend the average citizen’s life expectancy by 200 days, and prevent an astonishing 667 premature deaths every year.

If embraced worldwide, they could radically reshape the urban landscape as we know it. According to a recent study in Nature, some cities–including Mexico City, Tokyo, and Madrid–may be able to use superblocks to convert more than a third of their streets into green space and pedestrian zones.

The need for sustainable cities is greater than ever. Roughly two-thirds of global carbon emissions come from cities, and by 2050, roughly two out of every three people will live in one. If we can make our cities more sustainable, the thinking goes, we (maybe) have a shot at fixing the planet.

To understand how superblocks may be the key to unlocking the sustainable potential of modern cities, we first need to learn about what superblocks are, where they come from, and where they might take us.

What Is a "Superblock?"

A superblock is a way of organizing smaller, traditional city blocks into larger urban formations that reclaim street space from cars and give it back to humans.

Superblocks can come in many shapes and sizes, depending on the city deploying them. Gridded streets are ideal, but cities with “irregular layouts” can be just as well suited to the creation of superblocks, according to the Nature study. 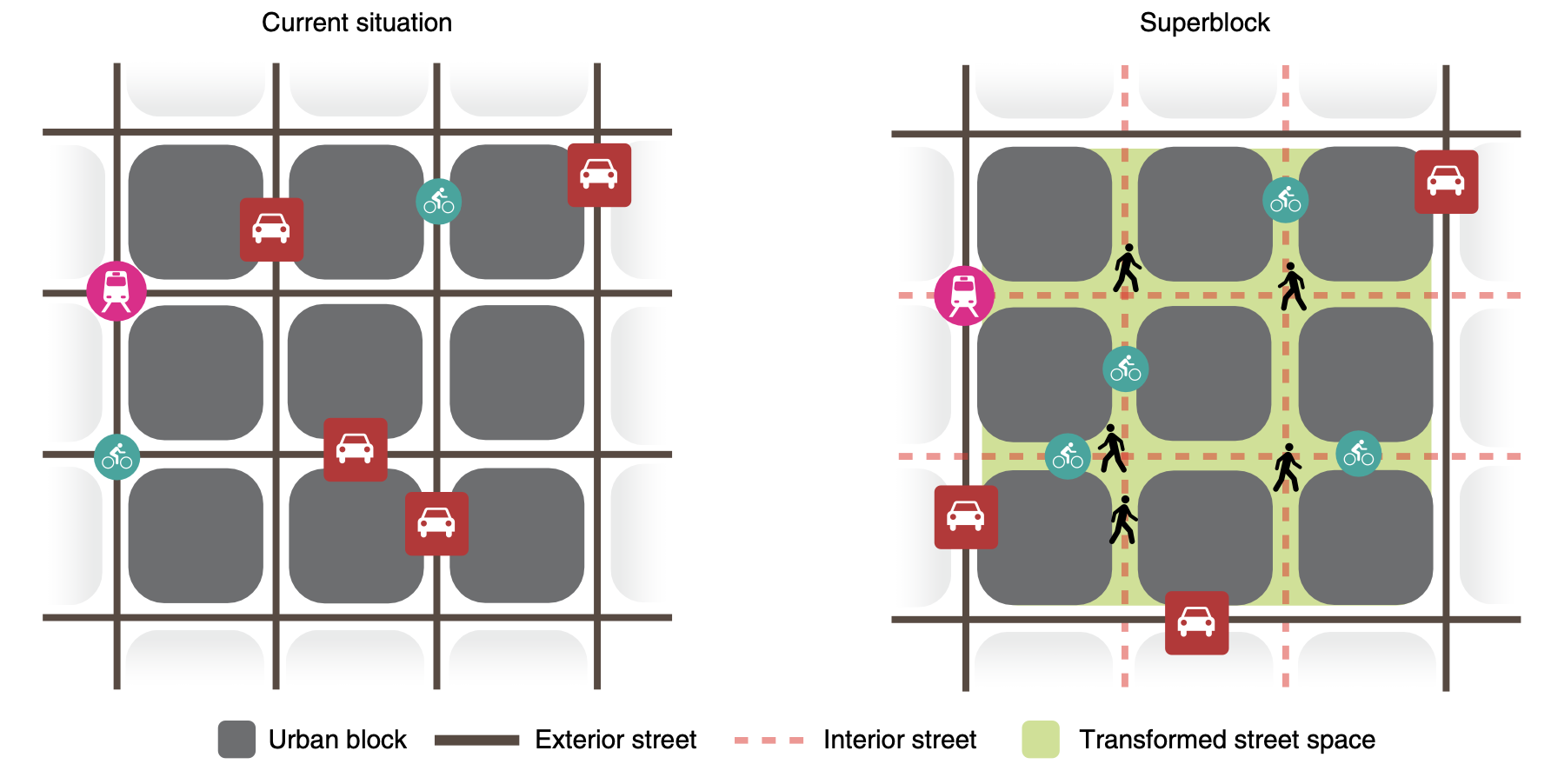 In Barcelona, a typical superblock consists of a three-by-three grid of nine existing city blocks with a size of about 400-by-400 meters. Inside, thru-traffic is slowed and reduced to a single lane and all other city traffic is diverted to the edges.

The big idea behind superblocks is to calm traffic. Once car traffic is slowed or eliminated within a superblock, the streets can be retrofitted for any number of public uses, from pedestrian walkways and bike paths to outdoor dining areas, parks, green space, and community gardens.

Taking the city back from cars

The proponents of superblocks believe that our cities will never be healthy or sustainable as long as they are designed more for cars than for human beings.

Cars take up a huge amount of space in the urban landscape. In Los Angeles, for instance, there’s more parking than public housing, quite literally more space for the city’s cars than for its people. It doesn’t get much better elsewhere: About a third of the space in all US cities is devoted to parking. Add in all the road and highway systems, and you're left with crowded downtown areas that commit roughly 50 to 60% of their space to automobiles.

All those impermeable surfaces create stormwater runoff, resulting in flash floods and the poisoning of urban waterways. Pavement is also a major cause of the urban heat island effect, which can raise the ambient temperature of cities by as much as seven degrees.

Cars, of course, are also huge sources of greenhouse gasses, with a typical vehicle emitting nearly five tons of CO2 per year. Meanwhile, the air pollution from car exhaust contributes to 10 million premature deaths worldwide every year. What’s more, cars also produce an incredible amount of noise, raising the decibel levels to unhealthy levels for millions of city dwellers. While electric vehicles are often touted as a cleaner alternative, most still run on fossil-fuel powered energy grids and, while quieter, still contribute to noise pollution in cities.

When our cities are designed for cars, they become incapable of performing one of their most basic and beneficial functions: to centralize all the amenities of life into a compact and walkable space. In the car-centric city, everything is scattered and fragmented, leaving citizens little choice but to lead sedentary, unwalkable lifestyles rife with health complications—a paradigm that replicates itself in suburban sprawl.

Superblocks are one way to upend this unhealthy and unsustainable paradigm and transition to carfree cities.

Since launching its bold superblocks program in 2016, the 2,000 year-old capital of Catalonia has become a promising model for the sustainable cities of the future.

But like the city itself, superblocks are actually nothing new.

Ironically, they are associated in some circles with Le Corbusier, regarded by many as a villain of modern architecture, and an enemy of sustainable design. In Barcelona, the superilla (Catalan for “superblock”) has the exact opposite connotation, and has been rattling around since as early as 1958, when architect Oriol Bohigas first proposed the idea as a solution to the city’s growth.

It was urbanist Salvador Rueda, however, who picked up the superblock thread in the 1980s and expanded it into a vision to transform the very fabric of Barcelona into a post-car city. Under his guidance as the director of the Urban Ecology Agency of Barcelona, the city created its very first superblock in 1993, in the neighborhood of El Born.

Fast forward to the present day, and Barcelona’s city government has fully embraced Rueda’s vision. There are now six completed superilles, eight more underway, and a plan to create a grand total of 503 superilles across the entire city.

Barcelona is no stranger to radical transformation.

The most legendary figure in the city’s long metamorphic history is Ildefons Cerdà, a pioneering architect who invented the word and empirical study of “urbanization” and set the stage for the arrival of superblocks.

Though his utopian vision was never fully realized, it was Cerdà’s 1860 plan for the city that created Barcelona’s distinctive grid system, with its wide boulevards and blocks organized into neat chamfered squares, an ideal configuration for superblocks.

His most iconic urban design achievement is L'Eixample district (pronounced lay-SHAM-pluh, literally “the expansion” in Catalan), a popular tourist destination in Barcelona and home of another architectural marvel, the basilica de La Sagrada Familia. 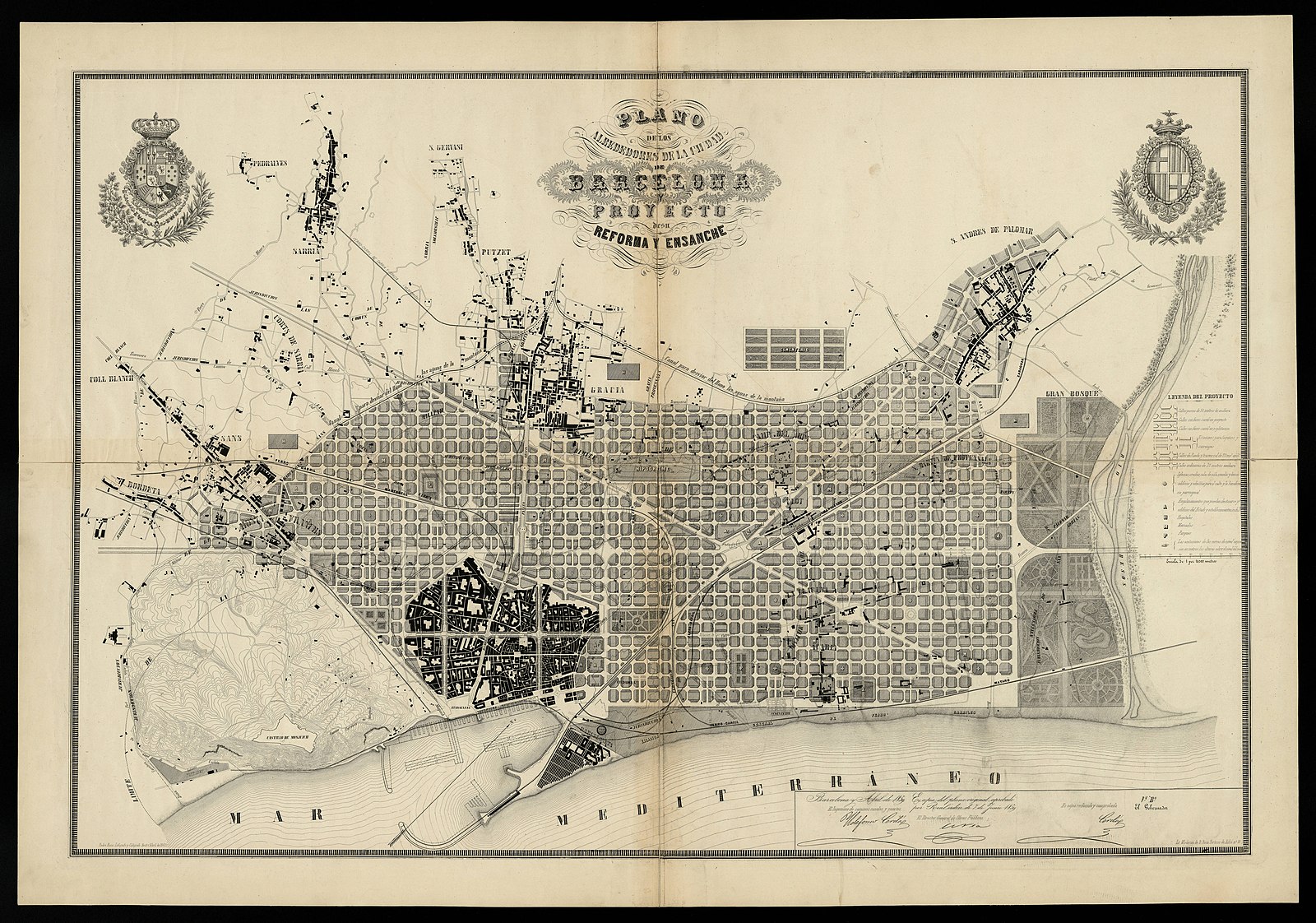 Cerdà was heavily influenced by socialist thinkers and hygienic theorists of the 19th Century, who sounded early alarms about the negative effects of cities on the mental and physical health of urban citizens. At the time, uncleanliness and high urban density had made life for people in cities all over the world nasty, brutish, and short: Between 1837 and 1847, the average life expectancy in Barcelona was under 20 years for the working classes and right around 38 for the wealthy.

It was to correct these abysmal conditions that Cerdà drafted his cutting-edge plan. His ultimate ambition was to reshape Barcelona into a healthier, greener, more spacious, and egalitarian city. Rueda shares Cerdà’s progressive vision, and often cites him as a prime influence on the superblocks program.

Like Cerdà, Rueda imagines an alternative form of urbanism itself, one that leverages statistical data and geographical analyses and privileges ecology and the needs of citizens above all else.

Rueda envisions the complete transformation of Barcelona into a massive, interconnected web of walkable and bikeable thoroughfares woven through with wide belts of green space. Vehicle traffic will still flow throughout the city on arterial roadways, but there will be vast areas where cars may only pass through slowly at a trickle, or not at all.

If everything goes according to plan and the 503 superblocks are someday fully implemented, Rueda estimates that Barcelona will trim its car-dedicated street network by 61%, reducing vehicular thru-traffic across the city by 13-21%.

This will open up roughly 6.2 million square meters of space for pedestrians and bicyclists across the entire city “without demolishing a single building”. Taking back the streets from cars will reduce air pollution to healthy levels for 94% of the city and lower ambient noise for 73.5% of residents. 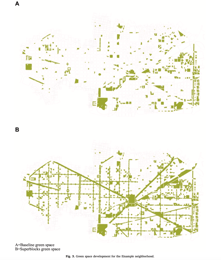 Altogether, the lessening of car traffic, dramatic increase in green space, and the addition of semi-permeable pavement within the interiors of the superblocks will help dampen the urban heat island effect and reduce stormwater runoff across the city. To coax residents away from car ownership, the city’s Urban Mobility Plan also calls for the creation of a cutting-edge public transit system with that aspires to the heyday of Curitiba’s formative Rede Integrada de Transporte.

Over time citizens will take active roles in reclaiming their neighborhood streets for whatever uses they see fit, revitalizing the democracy of public spaces in what Rueda sees as the most radical element of his superblocks proposal.

“A city,” Rueda writes, “starts to become a city when there is public space since it is the ‘house of everybody,’ the meeting place for interchange, leisure and staying, culture, expression and democracy… Public space makes us citizens and we are so when we have the possibility of occupying it…”

We are still a long way away from cities made of superblocks.

As enticing a model of sustainable urban design as they are, superblocks aren’t without their pitfalls. Though widely praised by many Barcelona residents, protests marred the roll out of some of the earliest superblocks. For those looking to create their own, the time and resource constraints, physical layout, and political dynamics within their cities may also prove unmanageable.

Barcelona has a steep climb ahead and has only just begun to embark on its journey.

And yet, slowly but surely, the superblocks are taking shape.

It’s an open question if they can be replicated elsewhere, but several American cities, including Los Angeles and Seattle, are willing to give it a shot and have proposed adopting superblocks of their own. Meanwhile, cities around the world are developing novel methods to take streets back from cars in their own ways.

Whatever the future may hold, the way forward will require us to think big ideas and take bold actions. If there is a way to fix our warming planet, it may be in the opened up spaces of post-car cities, among the verdant streets of the superblocks, that we find it.