‹ Back To Blog Home › 10 Shows on Hulu about Construction and the Skilled Trades
Thought Leadership
Mike Anderson | Published: September 22, 2022 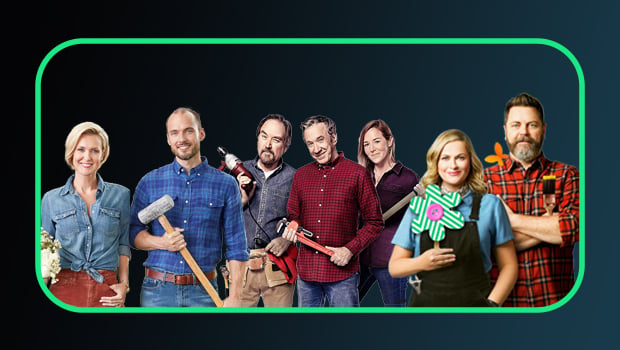 Shows about construction and the skilled trades can be hard to come by if you don’t know where to look for them.

That’s why we’ve compiled this top ten list (plus one honorable mention) of some of our favorite shows on Hulu that celebrate construction and the skilled trades.

While Hulu may not match the diverse range of Netflix building and crafts related content, it does feature some true gems scattered among an extensive catalog of entertaining home renovation shows.

1.) Your Home Made Perfect
2.) Impossible Builds
3.) Backyard Builds
4.) Making It
5.) Save My Reno
6.) Farmhouse Facelift
7.) Superstructures: Engineering Marvels
8.) LEGO Masters
9.) Family Home Overhaul
10.) Assembly Required
Honorable Mention: What We Do in the Shadows

1.) Your Home Made Perfect


Most remodeling shows follow a simple and well-trodden formula: Go from a shabby Before to a slick and polished After. This formula only features a single vision that is rarely discussed in great detail and we only get a good look at it during the Big Reveal when the project is finished.

Your Home Made Perfect mixes things up by exploring not one, but two different architectural visions for the same space and rendering each one in an immersive 3D virtual environment.

In each episode, two architects compete to have their unique vision chosen by a couple who is looking to radically redesign their home. The couples get to “try on” each new design before any ground is broken by donning VR headsets and going on virtual walkthroughs of the reimagined space.

The 3D software–a combination of CAD and BIM–empowers the architects to control any element of the space they want, from knocking down walls and opening up skylights to changing the colors and textures of the interior. The effect is often quite stunning and makes for engaging viewing for anyone interested in the intricacies of architecture and design.

Angela Scanlon brings cheeky humor to the table as the host of the show, which currently has three seasons. During interviews with the architects, Scanlon does a brilliant job of highlighting tricks and ideas from each design that you can incorporate into your own living space. Another big plus of the show: loads of Irish and Scottish accents.

There are three seasons of Your Home Made Perfect available to stream now on Hulu.

The premise is stressful but Impossible Builds somehow makes a pleasantly mellow viewing experience out of a series of strenuous construction projects.

A major reason why is that the entirety of the show (Hulu currently only has Season 1) takes place in the jaw dropping countryside of Scotland.

The camera takes us soaring over mountains, crystalline lochs, and misty wildlands, granting us a birdseye view of terrain that is at once breathtakingly beautiful and incredibly difficult to build in.

Every episode follows a different family through their journey of constructing their dream homes in hard-to-reach places. Off-site construction techniques get showcased throughout, with kit homes that are prefabricated as individual modules and then shipped off to the building site.

This is easier said than done, of course, as the rugged terrain of the Scottish Highlands presents some unique challenges. How, for instance, do you build a home on a remote cliffside or in the waterlogged grasslands of a bog? Tune in to “Impossible Builds” to find out.

Maybe you want a new deck, a woodshop, or an inground pool. Or maybe you’re looking to make a bigger statement with, say, a treehouse village or a backyard campground.

The requests can be a little unconventional at times, but Keenleyside and McCourt do a great job of delivering with playful banter and skilled execution that makes for a fun and educational viewing experience.

There are four seasons of Backyard Builds currently on Hulu.

On Making It, Amy Poehler and Nick Offerman of Parks and Recreation fame co-host a fun and delightfully upbeat reality show that celebrates makers.

The show brings together everyone from designers and woodworkers to taxidermists and retired baseball players to work on a buffet of eclectic DIY crafts challenges ranging from creating a custom toy to converting a closet into a play or work space.

The easy and playful dynamic between the bubbly Poehler and deadpan Offerman can’t help but bring a smile to your face as contestants duke it out in a good-natured competition to earn the $100,000 prize and the coveted Master Maker badge.

Only Season 3 is currently available on Hulu, and those eight episodes are expiring soon, so you may need to clear your schedule if you want to catch it before it’s gone.

If you’re looking to learn the skills to transform your own living space without breaking the bank, then this is the show for you.

Contractor Sebastian Clovis and designer Sabrina Smelko co-host in this melding of a DIY and budget-conscious home renovation show.

Smelko–who is replaced in later season by the equally talented Samantha Pynn–brings a lot of creative design chops and smart spending skills to the table, revealing cheap ways to tackle daunting projects with panache and style.

Clovis, meanwhile, puts the homeowners to work alongside him as he walks them through the building process from beginning to end with a lot of patience and good humor.

Produced and filmed in Canada, there are currently four seasons of the series on Hulu.

Time to take a detour into the countryside for our next home renovation show.

The two pull off some major overhauls, including the installation of a radiant floor heating system in Episode 1, Season 1. A lot of the homes in this show are very old, so striking a balance between the removal of outdated materials and historic preservation of vintage features inevitably plays an important part in Wilbrink and Pearson’s work.

There are currently two seasons on Hulu.

This next show is for the engineering nerds out there.

The only bad thing about “Superstructures” is that there are only two episodes available on Hulu. Each one zeroes in on an engineering marvel of massive scale that has extended humanity’s reach across the planet and into the stars themselves. Have you ever wondered how the International Space Station got built? How about one of the most powerful cargo ships on Earth?

Episode 1 in particular offers incredible insight into what it takes to construct the world’s largest spacefaring vessel. At 460 tons, the $150 billion ISS is a truly stunning accomplishment. “Superstructures” dives in deep, laying out everything from how the space station generates its own oxygen to how it’s able to maneuver away from space debris without using an ounce of booster propellant.

Okay fine, so it’s not strictly a construction or trades focused show.

Then again, if you were a kid who first fell in love with building things with LEGO bricks (the True LEGO Heads out there will snootily chide you that “LEGOS” isn’t actually a word), then this is the show for you.

Twelve teams of two compete with each other through a gauntlet of LEGO building challenges. Whether it’s assembling super bridges and mega city blocks or puppets and fashion items, this show delivers the goods for anyone wanting to live vicariously through each interlocking brick.

Will Arnett of Arrested Development and the voice of Batman in The LEGO Movie cohosts with brick master Jamie Berard and senior LEGO designer Amy Corbett.

Episode 2 of Season 3 is a real standout, with teams tasked with building a four-foot-tall LEGO structure that’s capable of withstanding a mini-earthquake.

There are three seasons of LEGO Masters available to stream right now on Hulu.

If you like watching your home renovation shows through tears of heartwarming joy, then look no further.

Family Home Overhaul is a Canadian reality TV series (another one?!) that focuses on “paying it forward” to  inspirational figures, from refugees to home caregivers, who have been nominated by their community to receive a home overhaul.

Neighbors, friends, and family members come together to help with the building process.   Series host Cheryl Hickey also often works with designers and contractors from other home renovation shows that are also featured on this list. Episode 2 of Season 1, for instance, sees Samantha Pynn and Sebastian Clovis of “Save My Reno” working to renovate the home of a beloved community football coach. Sarah Keenleyside and Brian McCourt of “Backyard Builds” also make several appearances throughout the show.

You can currently stream all eight episodes of Season 1 on Hulu.

Fans of Home Improvement will be happy to see Tim the Tool Man Taylor reunited with co-star Al Borland to host this off-the-wall show about building under pressure.

Instead of reprising their roles from the hit 90s sitcom, Tim Allen and Richard Karn play themselves as they oversee a spirited competition between talented makers from across the US who work from their home workshops on a variety of eyebrow-raising challenges.

Episode 1 of Season 1, for instance, kicks things off by tasking the contestants with building a functioning fire extinguisher in 90 minutes flat.

A shorter watch, Assembly Required has one season with 10 episodes.

Honorable Mention: What We Do In The Shadows

So this next show has nothing to do with construction, but we couldn’t get through this list without an honorable mention of What We Do in the Shadows.

A mockumentary style comedy, What We Do in the Shadows is about a group of vampires who have lived together as roommates on Staten Island for more than a century. Normally, the show chronicles their nightly misadventure, but Episode 8 of Season 4 does something a little different.

In a spoof of the house renovation genre, the vampires’ rundown mansion is selected for a makeover by a fictional show called “Go Flip Yourself.”

Comedy ensues, culminating in a name-drop around the 6:45 minute mark for a Milwaukee Tool M18 FUEL™ Chainsaw.

Hopefully we’ve provided you with some solid viewing options as you stream on into that good night.